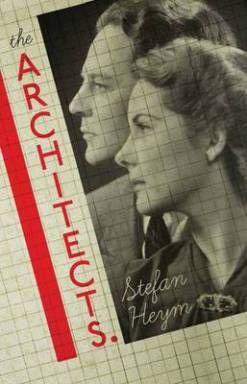 It’s the time of year when newspaper supplements and glossy magazines are full of holiday reading lists featuring books that suit long lazy days on a lounger better than snatched, cramped Tube journeys. Some of these books are tough tomes that require the time and mind-space your daily commute doesn’t allow. Others are those traditional beach reads, all pink cover and an eager-to-please font, that compliment your switched off state like a sunset piña colada.

Reading Stefan Heym’s The Architects during the recent heat wave was like a continuous dunking in a bucket of cold water, although more suffocating than refreshing. It’s not an obvious page-turner, but it was thrilling and intriguing and wonderfully evocative on a time and place in history that’s as unknown to me as Stalin’s years of terror were to his fellow comrades.

Set in East Germany in 1956, just after Khrushchev‘s speech denouncing the Stalinist regime, The Architects reeks of this time. A gloomy atmosphere almost rises up from its (excellent quality as noted by a book club participant) pages, if this book was made into an architectural model, it would be made of steel, concrete, big fur hats and snow-lined pavements.

But despite its repressive atmosphere and general un-summeryness, The Architects contains some key holiday themes: there’s romance. And a mystery. And a charming bad ‘un. Plus, there’s a sort-of happy ending.

The novel opens with a preface telling the last few hours of political prisoner Julian Goltz’s life before changing gear in Chapter One when we’re introduced to Julia and Arnold Sundstrom, the two architects that form the foundation of his novel. How is Goltz’s end related to the noisy, decadent, quite frankly rather dull-sounding, dinner party we suddenly find ourselves in? The plot builds with the arrival of Daniel Wollin who has spent many years in a political prisoner camp in the USSR, branded, like Goltz and millions of others, a traitor by grumpy old Uncle Joe. His arrival drives a wrecking ball through Julia and Arnold’s life and the world that they knew comes tumbling down.

Heym’s story is as gripping as his fictional characters. Born Helmut Flieg in 1913 into a German Jewish family, Heym left Nazi-occupied Germany, first for Czechoslovakia then the States where he lived until 1952 when he returned to what was now the GDR. Despite being a staunch socialist, Heym didn’t always see eye-to-eye with his communist leaders. He wasn’t very keen on the Berlin Wall either and campaigned for it to come down. Only, when it did, he was none too happy about the rush to lap up the joys of capitalism from those stuck without a Primark for all those years.

Like the returning prisoner Daniel, Heym is caught between two worlds, a socialist who disapproved of how the powers that be interpretation it. And he wasn’t afraid to speak out against the authorities. The Architect would have turned officials in the Volkskammer red with rage if it had been published during Heym’s lifetime, but no publisher, even one that was a good friend, would pick it up. The Architects doesn’t make a quite a big a splash fifty years on, but it’s a timely reminder of how power corrupts and human frailty bulldozing ideologies.

There’s some shonky dialogue and some dubious character developments (and a complete lack of understanding of women – you’re a bitch or a damsel in distress), but The Architects is a gripping, tense, important read and one that’ll help you’ll stand out from the crowd round the pool.