A dark thread of humour runs through this play that packs short, powerful punch 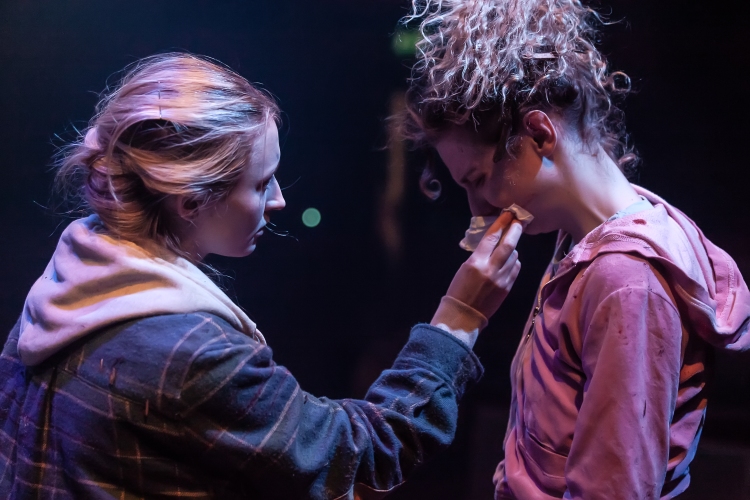 Addressing serious topics is part of the remit of the arts, but plays With. A. Message. can be clunky and overplayed.

We look to books, films and theatre to entertain us, of course, but the arts are also a crucial way of helping us understand the our world, as well as those worlds that many of us – thankfully – never see. Creating work that addresses more than the everyday this without sounding preachy or knocking people over the head with A Message requires a hand, a solid story, and strong characters that are more than just vessels to deliver The Point. All the Little Lights manages to walk this tightrope of narrative and message with ease, packing a punch with sharp dialogue and superb acting.

Three friends have gathered around a campfire in celebration of Lisa’s 16th birthday. Angry, hurt Joanne, 15, has brought along her new sidekick, 12-year-old Amy, who, it becomes quickly apparent, is out of her depth and perilously close to the danger that has ripped Joanne and Lisa’s lives apart.

This night around the campfire very much isn’t glamping in Dorset; it’s a disused bit of ground on the outskirts of an unnamed town; it’s sleeping by a railway track, and cold spaghetti hoops out of the tin; it’s punch make with Fanta and vodka swinged from a plastic bottle.

And the campfire tales aren’t cosy or heartwarming, they are ghost stories of a very real kind. There is a great deal unsaid in Jane Upton’s script, but the coded sentences, the tension and fear that radiates from Lisa, and Joanne’s destructive hurt and anger throb with disturbing detail. These are girls on the edge of society, clinging on to a system with no safety net below.

Lisa (Erin Mullen) is now in foster care with a big bedroom and a foster father who plays guitar. She had severed ties with her best mate Joanne (Lucy Mabbitt) before and was attempting to rebuild a life shattered by the sexual exploitation they were both subjected to. But Joanne can’t let go in the way Lisa wants, she is finding it harder to shake off the darkness of her past and looks set to take Amy with her.

The chip shop and predatory TJ – an older man who works there and whose appetite for young girls threatens to now consume Amy (Emily Fairn) – loom large through this one-hour production, but we never leave the fireside, Joanne and Lisa’s conversation skipping over and around the traumatic experiences they have been through.

They are a mix of cynical toughness and childishness – they play chicken with the trains on the nearby tracks and conjure up stories of the people who live in the houses with ‘the little lights’ they can see in the distance. But their shared trauma and horror lies between them, tearing them apart while binding them together. The threat to innocent, lonely Amy lingers ominously as the fires dies.

The three young actors deliver powerhouse performances, the pain emanating from them as brightly and intensively as a well tended campfire. The seriousness of the script is punctured by humour that never seems forced or over compensatory – even a moment of corpsing seems natural. And, crucially, while the subject matter is dark, All the Little Lights, is absorbing and compelling.

Playing as part of Camden Fringe, and supported by child exploitatin charity Safe and Sound, this production of All the Little Lights deserves wider exposure.