A lively, witty improv show with a deathly turn of phrase

Improv can go one of two ways: it can be toe-curlingly awkward, or skilfully quick-witted and pacey.

The performance is completely unplanned and unscripted with the audience – to a degree – playing scriptwriter and director.

The scenario is chosen by a shortlist compiled from the audience’s shout-outs, so on the afternoon we were there, the murder setting is a hen night – with a twist. For this is no ordinary hen night – and not just because it’s set in England in the 1920s when hen dos were as common as mobile phones: this one features actual hens (or rather imaginary actual hens). Meanwhile, the murder weapon is a very unlikely wet tea towel.

The audience member who is lucky enough – or perhaps unlucky, depending on your approach to participation – to catch the deerstalker hat thrown into the crowd by the inspector-come-narrator becomes Jerkins – the detective’s rather rubbish sidekick, who will help to solve The Case of the Wet Tea Towel.

The Cluedo-style colour coded suspects are a nod to another classic of the very English murder-genre and include Agatha Pink and Scarlet Scarlet. Then there’s bride-to-be Violet Violet, a well-known chicken scientist  (obviously) who will found dead in the chicken coop, surrounded by the plucked corpses of her beloved hens.

The hen setting is ripe for innuendo, especially in the first few scenes as the actors find their feet among the quagmire of scenarios and results in an over-reliance on cock jokes.

But the actors soon inhabit their flamboyant characters and the action moves along at a rapid tempo, reducing sections of the audience – and the inspector – to eye-watering levels.

There were obvious plot holes, and some scenes fell flatter than others, but it gathers momentum as the story develops, held together by wit and clever riffing. The length of each scene was wittily dictated by the lighting technician who – along with the musical accompaniment – often drove the punch lines. There were some great running gags and its sharp denouement is plausible thanks to some clever detective work by the stage-left sitting inspector.

A darkly comic look at age, gender, race and class 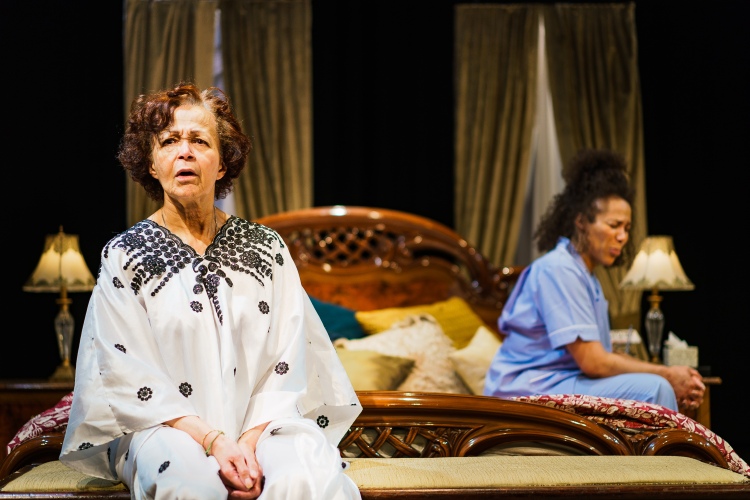 Lizan Mitchell as Carolyn (foreground) and Kim Tatum as Veronika in Dead and Breathing.

Cranky old biddy (although, she’s actually only 68, surely a spring chicken in baby boomer-terms),  Carolyn is a very rich woman with a very nasty streak.

Diagnosed with cancer years ago, she was meant to be dead within months, but she keeps on living to complain for another day.

Set in her big, expensive house (the set, featuring a real bath and a very comfy looking bed, is great), Carolyn snides from her place of huge privilege.

Cancer hasn’t so much turned her crankiness up to 11, but given her an excuse for it, sneering and sniping at the endless rounds of hospice nurses sent to her plush house to help and support her. Carolyn’s gone through 16 nurses in the past couple of years, and she’s proud of it.

But she hadn’t banked on Veronika, who’s her match in caustic words and silent strops. Carolyn is so enamoured with her new nurse, she’s soon phoning her lawyer to change her will, bequeathing her whole estate – $87 million plus the house – to Veronika.

The catch? Devoutly Christian Veronika has to kill an-on-the-bring-of-suicide Carolyn to secure her life-changing inheritance.

This two-hander is taut and engrossing, quietly – and darkly – comic, Chisa Hutchinson‘s script sharp and spiky. It zips along with a speed that defies Carolyn’s slow dying, occasioning lessening up as the two women’s pasts reveal themselves in the carpeted bedroom.

There’s one misstep – a reveal towards the end of the last quarter is too easily and inadequately resolved. It would have packed a bigger punch if it had come earlier as it would have tested Carolyn’s personality further and revealed a great deal more about the two women and their relationship.

But this little trip is expectantly handled by Lizan Mitchell as Carolyn, who gives a fantastic performance, inhabiting the role as comfortably as she does Carolyn’s big bed. Kim Tatum is a little less confident as Veronika but burns brightly when the pace slows and Carolyn’s snippiness sends sharp arrows into unhealed scars.
Dead and Breathing | Albany Theatre | Until 3 March 2018

Jack Klaff as Alessandro, Ilaria Ambrogi as Gina and Jack Gordon as Antonio in Screaming Secrets.

Family dramas are the cornerstone of theatre. Nothing packs a dramatic punch like a group of mismatched relatives coming together for an occasion. You know it’s never going to end with fond farewells and promises to share the vol-au-vont recipe.

Screaming Secrets’ set piece is Antonio’s birthday party where long held family tensions are unleashed in a cacophony of bitterness and tragedy. The mid-70s setting further magnifies the Pinter associations, although this birthday party doesn’t need strangers to inject the menace.

Twisting between melancholy, comic and downright tragic, the show interweaves philosophical threads that help pull together the play’s moral compass.

Philosopher Antonio (Jack Gordon) is grappling with his masterpiece and the meaning of life, while his frustrated writer girlfriend Monika (Triana Terry) clings to him, desperate for him to deal with real life and marry her.

Their row is diffused by the first party guest – Antonio’s “only friend” and his doctor, Simon (played with a compelling poise by Ben Warwick), who is half way through the first bottle of champagne when Antonio’s father and sister arrive, fresh off a turbulent flight from Italy. Their arrival signals the beginning of a bumpy ride for everyone.

We know before Alessandro’s arrival that his is being sued by his employees, many now dying due to diseases caused from working as his factory. Alessandro (Jack Klaff) wants to by-pass this problem and hand the family business to Antonio, who is reluctant yet conflicted.

But this problem is soon dwarfed by another, larger, sadder discovery when Antonio discovers his hypochondria might not be in his head after all.

Writer Alexander Matthews, himself also a philosopher, delves into life’s bigger questions: how are our morals altered by the shadow of death? And what does it mean to protect our loved ones? Should we be altruistic to the point where we actually hurt others?

Screaming Secrets is a well-paced drama, with energy and verve that perhaps doesn’t give you the big takeaway it promises to deliver, but will get you musing on the injustice – as well as the meaning – of life.

A one-woman show that gives a feminist interpretation of this classic genre doesn’t ooze with quite enough noir.

Double Infemnity, a nice twist on the title of the 1940s-crime noir film Double Indemnity, is a one woman play, starring Katrina Foster as Effie-Lou, a former sex worker forced to turn detective when her PI friend Joe disappears.

Ellie-Lou’s hunt for Joe draws her deep into a world of murder, sex trafficking, and dodgy beehive wigs.

Double Infemnity bills itself as a stylish and gender-flipped crime noir and is the product of collaboration between two female theatre companies, Little but Fierce, and Paperclip Theatre. It’s a one woman play that turns the smokey, masculine world of crime noir into a feminist fight for justice.

Foster doubles, when needed to, as other characters in this off-beat crime noir. And she isn’t entirely alone on stage – she’s backed up by a virtual young Brad Pitt who pops up on a screen overhead to add a visually comic dimension.

But a topless Brad and Foster’s on-point red lips and red nails aren’t quite enough to lift this show from the atmospherically dingy Vaults Studio Theatre to seedy 1960s Los Angeles, despite Foster’s obvious strengths.

The show is peppered with some clever gender stereotypes role-reversal from co-writers Naomi Westerman, Catherine O’Shea, and Jennifer Cerys. But one performer plays are hard to pull off – how do you move the show beyond a storytelling monologue to something more dimensional?

There is an attempt to do this by including a couple of audience interactions, which added a bit of zip, but overall Double Infeminity doesn’t quite pack a big a punch as the genre it’s riffing off. Foster equips herself well in the role, but is encumbered by a script that never really lifts us into this sleazy world, relying too heavily on the crime noir tropes to tell its story.

The rumbling trains above aren’t the only reason the plot gets lost, the show’s main themes – exploitation of women, what it means to be a woman in a man’s world – don’t ring as loudly as they should, lost amid a narrative that isn’t as tough as the world it’s portraying.