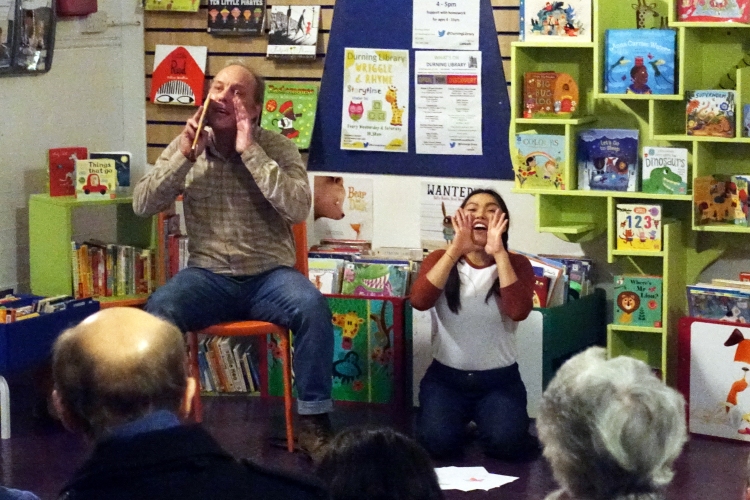 Public libraries have always been about more than books. They have laid at the heart of many communities since their inception, designed to inspire, educate, engage and thrill. In recent years, they have become increasingly squeezed and compromised as budgets are slashed and their role questioned. So what better way to celebrate Libraries Week than show what they can be and turn these silent spaces into a stage. After all, libraries and theatres share the same currency: stories.

Baseless Fabric Theatre are a site-specific theatre and opera company that create work in public spaces to encourage people to see art forms and their local public spaces in new ways. As part of National Libraries Week, they have chosen two David ‘American Buffalo’ Mamet short plays (at seven minutes, Dark Pony is a slip of a piece), both sparse enough to lend themselves well to the space between the bookshelves (it helps that John Harvard Library has a coffee shop where Reunion, the night’s first performance, takes place).

The American playwright and scriptwriter is firmly in Richard Ford and Richard Yates territory where the all-American family is revealed to be less picket fence, more prison wall. Reunion, Mamet’s 1976 two-hander features a meeting between a father and his daughter, now (unhappily) married and a step-mother, who have been separated for nearly a lifetime. Through Mamet’s hyper-realistic dialogue that is both awkward yet precise, even lyrical at times, the characters’ attempt to find those lost years. Bernie, a reformed alcoholic, has largely found peace with himself, contemplating a third marriage and content with his job in a restaurant kitchen. He dominates the meeting, explaining his life and his mistakes through some amusing anecdotes. His daughter struggles more under the weight of his absence, her future also promising little. But while they may not walk off into the sunset, the pair do find some kind of equilibrium between the past and the present.

Dark Pony is a bitesized sketch where a father tells a favourite bedtime story to his young daughter as they drive home late at night – the story of a young native American brave and his trusty horse, Dark Pony. It’s sweet, although so fleeting it doesn’t have time to crawl under your skin.

David Schaal as Bernie and the book-reading father captures the right kind of wide-eyed intensity, reeling from his hard life and the mistakes he’s made, desperate for a fresh start. And you can almost hear Siu-see Hung’s (Carol and the young daughter) internal struggle, as she tries to find the words to put her life into focus.