An upstanding British spy has a past murkier than the North Sea in John le Carré’s cool, poised classic 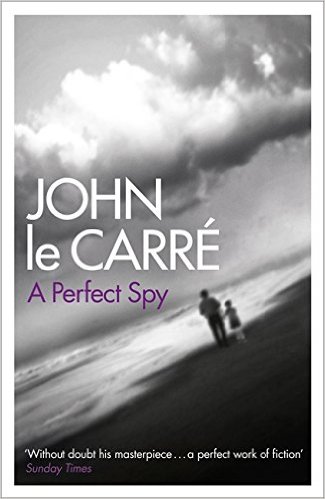 Despite being a fan of TV espionage (I will watch anything with handsome spies sitting in smoky rooms, from ludicrous, bonkers Spooks to ludicrous, serious London Spy) my enjoyment of dramatised spy stories has never translated into books. Graham Greene’s murky world of post-war espionage in The Quiet American and his wonderfully comic novel Our Man in Havana are the closest I’ve come to the genre on the page.

And where else should I start investigating spy novels than with the master of the genre, John le Carré whose appeal has been given another boost with the recent super slick, beautifully peopled, totally ridiculous BBC production of The Night Manager. I enjoyed The Night Manager as much as I laughed at it, so I was keen to explore his written word and see how it compared to this campy, tense adaptation.

His 1986 novel A Perfect Spy is a dense doorstopper that follows the charming, mysterious Marcus Pym – a husband, father, respected member of The Firm, and the “greatest con I knew” according to his boss, Jack Brotherhood.

In the past and present, Marcus spins lies, creates personas to such an extent that even he no longer knows who he is. We begin at the end, just after the death of his estranged father an event that has tipped him over into an abyss that he’s been teetering on the edge of his whole life. His dad, Rick Pym (based on le Carré’s own father) was a crook, an old school cockney criminal who will charm your life savings from you and you’ll be glad he did.

The Pym we meet at the beginning is a seemingly upstanding English gent, his sometime landlady of the bed and breakfast retreat in an unnamed British coastal town is charmed by her ‘Mr Canterbury’. But unbeknown to her, Marcus is sitting locked in his attic room, spilling out his secrets and his past on paper, nurturing a burn box that holds information that could blow the USA and the UK apart. The race is on to find him, from his boss at M16 Jack Brotherhood, his wife Mary to his Czech agent Axel. Who will find Pym first?

As we follow the search, we move across time and the continent as we re-visit Marcus’ difficult boyhood to unravel his present. He sees his mother carted off to a mental institution, her stand-in, Libbie’s, twisted body after she jumps to her death. It is, as a great spy book should be, full of intrigue and suspense, but what I found most thrilling was le Carré’s writing. His style took me by surprise. I hadn’t accounted for the spymaster being such a beautiful writer, I always assumed his bestsellers were brash and plot driven, but his words are frequently lovely, even delicate despite his prose being as dense as the air in a room of chain-smoking spies. There is no easy chronological order to A Perfect Spy, his structure is fluid as we move between past and present with little fanfare.

I expected a heavy hand to write this most macho of genres, but the human relationships le Carré weaves are far bigger page turners than discovering which side of the iron curtain the protagonists are on. I didn’t always find A Perfect Spy an easy read, it was at times dense enough to be impenetrable, it’s aloof and unemotional and the female characters are willow-o-wisps, falling into either 1950s cookie cutter wives or sexy PAs who seduce their bosses with their minxy ways.

But while I may not be about to defect to the world of spies in fiction, I’ve definitely been caught in its web of intrigue.