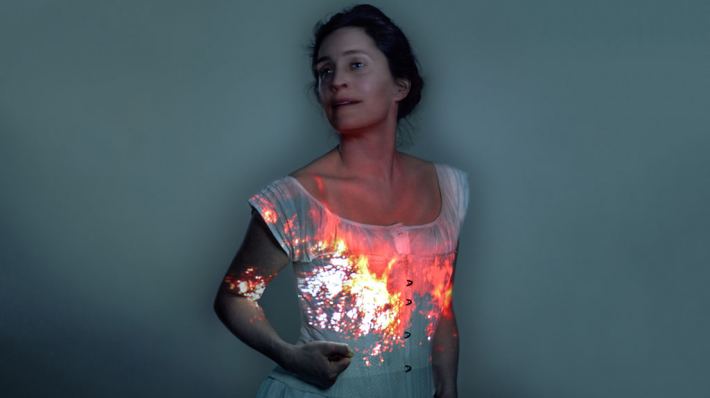 Jane Eyre at the National Theatre, devised by the Company from the novel by Charlotte Bronte

Charlotte Brontë’s classic novel can’t be an easy beast to tame for the stage. You have to grapple with the fact that everyone knows at least the outline of Jane Eyre (mad woman, attic, THAT wedding scene, fire) and, while the novel is so multi layered, so stuffed with action, it’s Jane’s internal monologues that are the book’s backbone. How do you bring a freshness to such a well-known tale while capturing Jane’s outward fierceness and inner delicacy?

Like this it would seem. This co-produced National Theatre and Bristol Old Vic adaptation of Jane Eyre has managed to harness the author’s – and the protagonist’s – energy and power and bring a fresh, original angle to this well-loved story that doesn’t diminish the source material.

The production was originally devised by the company without a script; improvised by the cast and then tamed by dramaturg Mike Akers. This fluidity and lack of constraint, wonderfully directed by Sally Cookson, really shines through in this production and lends it so much of its magic.

Akers, Cookson, a fearlessly talented and committed cast and a beautiful score by Benji Bower capture Brontë’s magic and Jane’s restless spirit – no narrative net or awkward theatrics ensnare Madeleine Worrall’s Jane as we follow her from a squawking baby to a contented mother. The whole production seems to spin around Jane’s musings near the beginning of her time at Thornfield: “It is in vain to say human beings ought to be satisfied with tranquility: they must have action; and they will make it if they cannot find it.”

I loved the restlessness of this Jane Eyre, the small company, multitasking in several roles, are rarely off stage (in Worrall’s case, never). Jane Eyre is a force of nature, brave and self-possessed, her self-awareness so complete that she’s beyond shocking with the truth. Worrall excelled in the part, giving Jane that fierce determination and vulnerability that Rochester and the reader fall in love with. Her inner monologues are spoken aloud by members of the cast like a chorus in a Greek tragedy, but they’re never overcooked, they feel part of the script not a convenient way around it.

Felix Hayes’ Rochester is every bit the striking, booming, self-righteous Brontë hero, perfectly walking the line between boorish posho and sensitive, repentant new (Victorian) man. Despite the worst proposal this side of Colin Firth’s Darcy, oh, and the small matter of his wife in the attic, we are rooting for these two to get together. There is humour too, some of it provided by Brontë’s own witty hand, some by Laura Elphinstone as Rochester’s hyper excitable ward Adele and a great deal by Craig Edwards’ brilliant comic turn as the hero’s dog Pilot. (On paper this role must have sounded like the stuff of an actor’s ‘back-end-of-a-pantomime-horse’ worst nightmare, but Edwards’ plays it so well, that it’s human equivalent of the scene-steeling goose in War Horse).

The set is integral to the play, a deceptively simple design of raised wooded boards and ladders that is as believable as a grand mansion on fire as it is a TB-ridden school. Wrapping all this up in a delightful aural package is composer Bower’s score that fuses jazz, soul and folk in original arrangements to beautiful effect. Melanie Marshall is both the ghostly form of poor Bertha in the attic and a captivating singer, crystallising Jane’s thoughts in song, her voice as clear and startling as a frosty Yorkshire morning.

You may think you know Jane Eyre, but this production is so full of surprises and such a stunning piece of theatre, that you’d do well to take a another trip to Brontë country.