Great things come in small packages so they say, and, as with the haiku, the short story and sonnets, creating constraints in art can encourage creativity where too much space can stifle it. It makes sense, then, that plays as long as scenes allow the writing to shine unencumbered by conventional narrator arcs or structure.

The short form play is something new to me, but not to The Miniaturists 54 who have been bringing the best in condensed script writing to the stage for the past decade. The Miniaturists 54 celebrated their 10th anniversary at Dalston’s theatrical gem The Arcola with five original short-form plays from burgeoning young writers and some older(er) hands – established playwright Owen McCafferty wrote the fourth of the evening’s pieces, Damage.

Curated by writers Declan Feenan and Will Bourdilon, the Miniaturists focus on the writer who are also heavily involved with the production of their script, including choosing the director. That’s not to say the acting is sidelined, many of the performances on this 10th anniversary show were every bit as committed and punchy as they would be in a longer production.

The plays are linked by a theme of life, death, renewal and displacement. The evening began with Twins by James Fritz, which saw an elder woman (Phyllis McMahon) reminiscing about her life as she flicks through a photograph album. We learn at the beginning that the woman lost her twin just before she was born, a name-less ghost that haunts her through her life that is counted down in scientific terms by her shadow (Simona Bitmate).

This is followed by If We Got some More Cocaine I Could Show You How I Love You, an Irish-set two-hander where two young men, having stolen £500 from a step-dad, hide out on the roof of his house, precariously close to the edge of both the ledge and the truth of their feelings for each other. The first half closes with the wonderfully imaginative Checkout where St Peter’s Gate is reconsidered as a supermarket. If you’re lucky you get a ‘bag for life’ that takes you back down to earth and a second chance. It was a funny, quirky piece that closed out the first half in style. 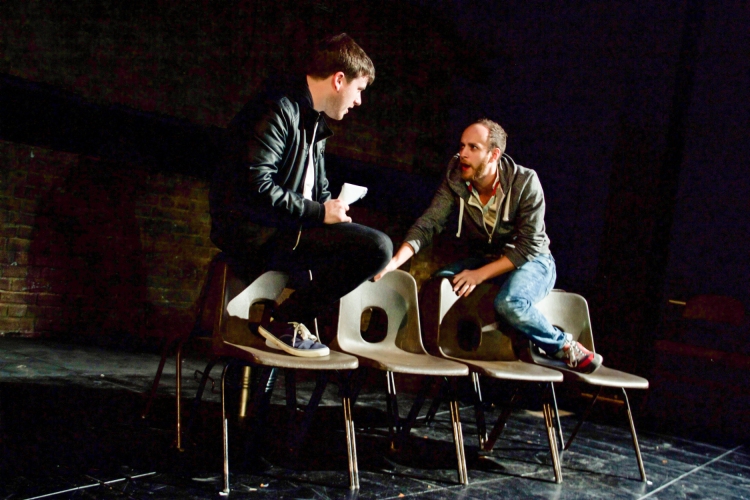 If We Could Get Some More Cocaine by John O’Donovan. Photographer: Claudia Marinaro

The aforementioned Damage is another two-hander, this time an elderly couple played by Karl Johnson and Sue Porrett, squabble and row seemingly harmlessly, until the end brings a rawer, darker feel.

It’s a shame then that the evening rather stumbles with the baggy Kampala that takes the vast theme of Uganda’s independence and the rise and fall of Idi Amin and attempts to condense it into three short scenes seen through the eyes of a group of students. The set-up felt unfocused and confusing despite some committed performances.

This final piece, while ambitious, proved that short form play writing is an art form in itself and not every subject is ripe for its condensed structure. These series of one-offs seem to work best when they’re not telling a story so much as an idea, revelling in the joy of the written word and the creativity a 20-minute slot unleashes.