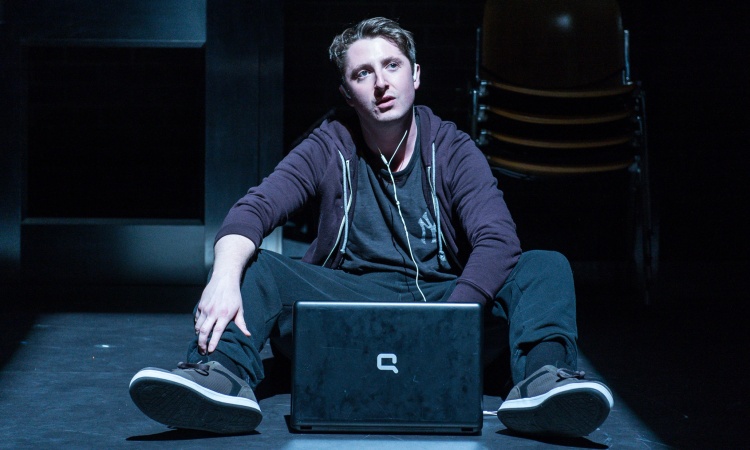 Ryan McParland as Teddy Ferrara at the Donmar Warehouse

Based on the true story of Tyler Clementi, a student who killed himself after his roommate secretly filmed him kissing another man in their room, Christopher Shinn’s University Campus drama makes its British debut at the Donmar Warehouse.

The Teddy (played brilliantly by Ryan McParland) of Shinn’s play is an outsider in many ways. He’s awkward, odd and gay – a freshman struggling to establish himself against a world resistant to difference. He hangs around on the periphery of things, instantly forgettable to everyone, even those who are well meaning like Luke Newberry’s Gabe, the charming head of the queer students’ group. Bullied and ignored, Teddy never gets to graduate.

Teddy’s suicide is the catalyst for dialogue between the University President and representatives from the college’s minority groups in a bid to improve conditions and attitudes for homosexuals, trans-gender and disabled students. These conversations are the play’s backbone – a tennis match worth of self-interested ideas batted back and forth – played out alongside Gabe’s bid for student president and his relationship with his jealous boyfriend Drew and his unlikely friendship with jock,Tim (Nathan Wiley).

Dominic Cooke’s production is terrifically acted, and the first half at least is a powerful piece of drama that hits a xylophone’s worth of excellent points. Shinn asks us to examine are own prejudices and the need for us to be honest about them, something represented in Gabe, who, as the play’s ‘good guy’, is possibly the post blinkered of anyone – he certainly has two of the most horrid and flippant lines that make the audience vocally gasp.

But while the writing and acting are pin-sharp, the narrative arch is a little flabby. Shinn tries to tackle too much – Teddy Ferrara throws lots of issues up into the air and the pieces never really fit together as they fall to earth in the second half.

The production does produce some great acting. Matthew Marsh is outstanding as the insincere university president and senate member in waiting. Luke Newberry (currently playing bumbling young policeman in From Darkness) as Gabe is compelling as a self-righteous student whose struggling with relationships, friendships and his own ambitions. Ryan McParland and his snotty nose strikes such a vulnerable figure as Teddy that he’s difficult to watch (especially with that snotty nose).

Teddy Ferrara is a an uncomfortable watch, too uncomfortable for some as the empty seats after the interval revealed. The woman behind me who left, commented to her friend that while the play was “interesting” it’s “not our world” which I would say is the very reason to stay. Theatre is as much a portal into other world as it is a reflected of our own. This reaction rather reinforces Shinn’s and this production’s point that the mainstream is reluctant to raise the issues of those they cast aside.

Teddy Ferrara magnifies society’s defects. It’s hard hitting and bleak yet curiously unemotional. There are some funny moments (many courtesy of some excellent comic timing of Marsh) but Shinn’s script is taunt with politics. But it’s a gripping, insightful piece of theatre. See it – and stay.