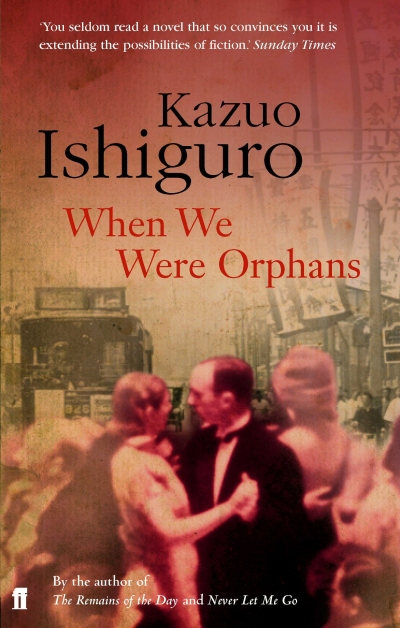 When We Were Orphans by Kazuo Ishiguro published by Faber & Faber

With the release of his seventh novel The Buried Giant, I realised I’d rather neglected Kazuo Ishiguro’s back catalogue. The only work I’d read of his was Never Let Me Go a rather gloomy sci-fi novel that was a long way from the musty Merchant and Ivory air that I’d always rather associated with him. Conversely, When We Were Orphans appealed because I needed the bracing air of a costume drama,  a trip into the well-written past. Plus it was the only Ishiguro in the library.

Ishiguro is not a showy writer. I thought that the science fiction coolness of Never Let Me Go encouraged his brisk prose, but it turns out this is just how Ishiguro writes. His cold, odd style fits nicely with When We Were Orphans’ protagonist Christopher Banks who is a rather strange, slightly shady creature who’s, nevertheless, rather endearing. Written in the first person narrative, Christopher is our good friend the unreliable narrator. As is the Ishiguro way, much of Christopher’s true personality is hidden from us, but we do get a few clues from childhood friends (“My goodness, you were such an odd bird at school”) that reveal our narrator may not be as well balanced an individual as his smooth delivery suggests. But, then Christopher is a literary detective and so obliged to be an odd ball.

Set against the backdrop of the opium trade and the rumblings of war, When We Were Orphans is part detective novel, part love story (with, it’s true, very little romance). It reminded me of Graham Greene in his spy drama moments as well as JG Ballard, partly for the Shanghai element and partly for the prose which, like Ballard’s, is beautiful in its plainness. There’s an old-fashioned tone to it that I enjoyed and a commitment to a tight narrative even when the plot heads a little off centre.

The story starts in 1930, although we don’t stay there for long. After an early childhood in the international settlement in Shanghai, Christopher Banks is living in London, a man with an increasingly successful career as a detective. He is reminiscing about one afternoon in 1923 when he bumped into an old friend  who invites him to a party where he sets eyes on the mysterious Sarah Hemming. He is captivated by her despite being warned by a fellow party guest that he’s far too insignificant to peak her interest. She pops up several times in the novel to prove this man wrong.

Banks is presumed to be an orphan, both his parents having disappeared when he was a boy in Shanghai within days of each. His mum was heavily involved in the anti-opium campaign alongside ‘Uncle’ Philip and wasn’t afraid to challenge Chinese warlords and British big businesses about their actions that had led to thousands of helpless local addicts.  Was she killed to silence her? And what was Uncle Philip’s involvement?

Brought back to England by the kindly Colonel Chamberlain, Christopher is brought up by his aunt in Shropshire. The mysterious case of his missing parents casts a dark shadow over his life that he can never quite escape – it shapes his childhood games and choice of career. The novel revisits those years in Shanghai in the run up to his parents’ disappearance where we also meet Akira, Christopher’s childhood friend. We swing backwards and forwards between the past and present  – as the years move on, Christopher’s reputation as a detective continues to rise and, after inheriting a nice little sum from his aunt, his life is comfortable (he even picks up a little Canadian orphan to play families with). But, as he tells the Colonel during a brief reunion in the early 1930s, the past is “where I’ve continued to live all my life. It’s only now I’ve started to make my journey from it”. He must return to Shanghai to discover the truth.

Ishiguro doesn’t believe When We Were Orphans is his best work, and it’s not perfect. The plot rather descends into chaos when Banks returns to China and starts tearing around chasing ghosts and Sarah (who arrived several months before with her buffoon of a husband) in a blur of a rushed end and strange turns that set off the beggars-belief alarm. But despite the that-would-never-happen klaxon, I was taken with Christopher, his unreliable memory and his attempt to flee the past by hurling himself right at it and soaked up Ishiguro’s crisp prose with relish.

3 thoughts on “Book review: When We Were Orphans by Kazuo Ishiguro”