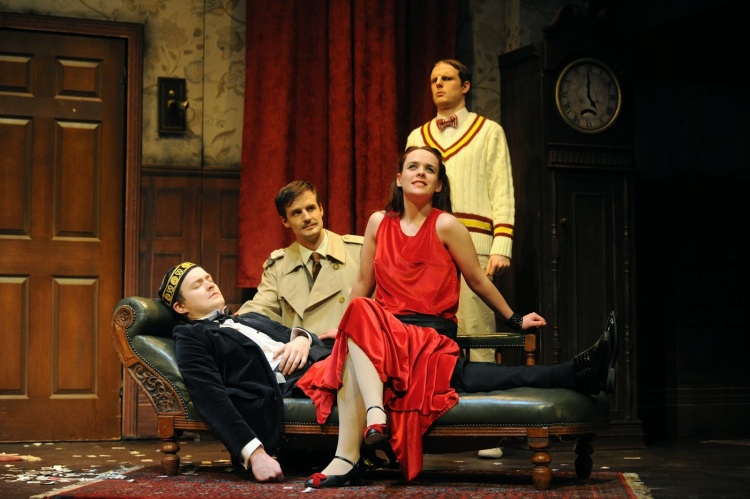 Farce and slapstick are divisive types of comedy; they will either leave you crying with laughter or cringing with shame. The line between appalling and appealing is small with this kind of comedy and it takes an excellent script, dynamic acting and tight direction to make all elements fall (often literally) into place and pull off this deceptively difficult genre.

The aptly named Mischief Theatre Company’s The Play That Goes Wrong has largely succeeded in bringing all those elements together to create an evening that has had audiences metaphorically rolling in the aisles since it debuted at the Old Red Lion in Islington before making its first  West End appearance in 2013. After travelling to Edinburgh, it’s back at London’s Duchess Theatre until early next year.

The play that goes wrong is  am-dram group the Cornley Polytechnic Drama Society’s attempt to put on a 1920s whodunit, The Murder at Haversham Manor. The Play That Goes Wrong wrings out all the elements of hammed-up amateur-dramatic productions, camp period murder mysteries and the archness of the theatre with a great deal of clever silliness.

Despite not being an enormous slapstick fan,  The Play That Goes Wrong still had me chuckling. This is not subtle theatre, it’s frantic to the point of mania at times and you are assaulted with slapstick (much of the humour revolves around the set falling down). Much has been made of its comparison to  Michael Frayn‘s Noises Off, his genius play following the backstage woes of a touring theatre company. The Play That Goes Wrong isn’t as sophisticated as Frayn’s  classic, although it’s not without intelligence and a dollop of farcical meta – my favourite parts were when the actors were acting at not-acting, when you caught a glimpse of the character behind the character.

It’s a well honed piece of theatre made all the more impressive by its backstory. Three of the cast members (Henry Lewis, Jonathan Sayer and Henry Shields) also wrote the script and this a passion project with plenty of heart and humour.