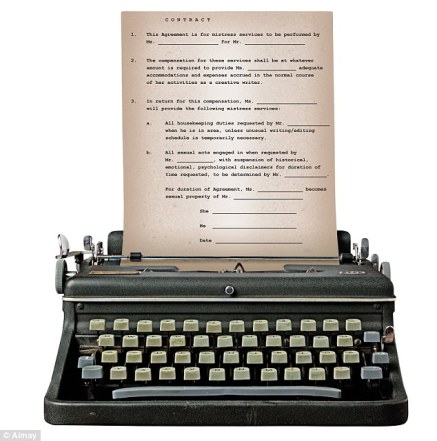 Abi Morgan, Britain’s script writer du jour, is the woman with the pen behind big screen hits such as Shame and The Iron Lady and the small screen misfire The Hour (that I actually rather enjoyed) as well as many other TV and movie screenplays. And now she’s taking on theatre with her playwriting debut The Mistress Contract at the Royal Court, an adaptation of the true story of one couple’s attempt to redefine the nature of relationships – or at least their own.

The book is written by the anonymous She and He, now 88 and 93 respectively. It’s written as a dialogue based on the conversations they have logged on an archaic looking Sony tape recorder during their 30 year relationship.

We first meet She (Saskia Reeves) and He (Danny Webb) in her (paid for by him) modernist glass house in the desert (masquerading as a garden as She pointed out at one point) that’s full of very unsubtle phallic cacti. It’s 1981 and She looks like Diane Keaton in Anna Hall. This may or may not be deliberate, there was certainly something very Woody Allen about the production, all introspective, slightly self-conscious discussions, half-ideas flinched from the stacks of books that piled up and up after each scene.

They had first meet at college in the 1950s. They were both married when they chanced upon each other some 30 years later, a meeting that led to an affair that would span three decades and ultimately spawn a book and this play.  She is a committed, academic feminist with three children whose conflicted feelings about men and marriage lead her to the idea of drawing up a contract between her and her lover. He would provide her with a home and an income in return for “all sexual acts as requested with suspension of historical, emotional, psychological disclaimers”.

The structure of the book lends itself well to a stage production, although would the nature of these conversations (essentially: two people sparring about gender politics and an awful lot of navel gazing) make for engaging theatre?

The answer is: on the whole, yes. The opening 10 minutes of this one act play with its talk of blow jobs, orgasms and all night sex sessions seemed to set the scene for a randy 90 minutes, much to the disgust of two Chelsea ladies who walked out noisily during one of the scene’s more revealing (verbally at least) parts.

But this bawdy start soon gave way to something far more introspective and political. The Mistress Contract was remarkably free of sex; it’s a story of feminism and gender politics within a relationship and also the changing nature of feminism – is She’s Andrea Dworkin-style book-focused feminism still relevant in a world where too many people (wrongly) believe the equality job is done?

The two actors were quietly engaging and handle the whiff of pretension with a down-to-earth relatability. She and He could come across as rather silly pseudo intellectuals, but Reeves and Webb instilled them with a likability. Webb in particular handles He with aplomb. He who goes from a bolshy bloke full of machismo and misplaced sexual confidence to a shuffling, baseball wearing old man, content to talk irrigation systems over the breakfast table without the shift feeling jarring.

The Mistress Contract raises a great many questions that it doesn’t answer: was She’s decision to hand over control to a man enlightening or a betrayal of her beliefs? Was she not putting all the power in his hands? Or was she allowing him to discover himself what she meant to him? Was their contract any less restricting than a marriage? These make for many an overheard lively conversation in the Royal Court bar afterwards.

The end goes rather meta as the two of them, now shuffling around a fax machine waiting for their editor’s verdict on their manuscript. With the imminent publication of their book, their project – and their relationship – was over. Or was it…

The Mistress Contract is now booking at the Royal Court until 22 March. Visit www.royalcourttheatre.com for tickets.