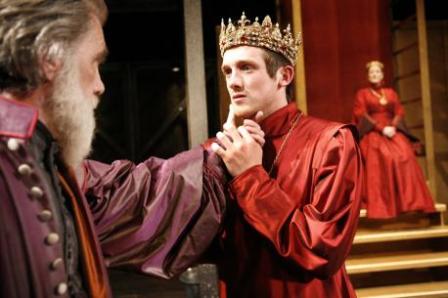 Henry VI, Part 1 is according to, ahem, Wikipedia, considered by those that know, to be Shakespeare’s ‘worst’ play. Of course, these things are relative. When you’re a genius, your worst tends to still be rather good. Shakespeare wrote 1, Henry VI in collaboration with Thomas Nashe (again, thanks Wiki) and despite its lack of poetry and some rather clunky rhyming couplets (exaggerated for comic effect at one point by Nigel Hastings as a hugely entertaining Duke of Burgundy when he highlights the awkwardness of the line, ‘Who craves a parley with the Burgundy’, we’ll blame Thomas for that one), it still beats an episode of EastEnders.

What it lacks in finesse, Henry VI, Part 1, the first part of an unofficial trilogy, makes up for with some kickass characters and some significant historical ground zeros. Unfortunately, the first of the big names arrives in a coffin as the play begins with the funeral of scourge of the French, Henry V. One of the many great things about Shakespeare’s Globe is its intimacy, especially for the groundlings who often find ourselves standing face-to-face with a distraught Talbot or shuffling out of the way of a soldier brandishing a plastic sword. This production opens with Henry’s funeral procession that walks slowly through the crowd as Mary Doherty as Queen Margaret, sings a haunting melody. It’s hugely affecting, you are as much a mourner as an audience member as we make way for the black coffin. The fall of the great king and the consequences of his early death are reflected in the youth and bewilderment of his son (play with a touching vulnerability by Graham Butler) who follows the coffin onto the stage and spends most of the first half reading a book, his chin wobbling in fear as his father’s legacy unravels in front of his innocent eyes.

There are more lively famous people from history stealing Harry 6’s thunder including car park internee Richard III’s father, Richard Plantagenet, who later becomes Duke of York played by Brendan O’Hea who was leek fan Fluellen in last year’s Globe’s Henry V and still retains that hint of engaging campness. Then there’s Joan of Arc, who starts off as lowly shepherd girl Joan La Pucelle and appears to be from Yorkshire played with vigour by Beatriz Romilly. Plus you get all the stuff about the beginning of the War of the Roses, which, according to Shakespeare took place around a rose bush where everyone tried to out-rose-pun each other.

Nick Bagnall’s production shares the same relaxed openness, easy charm and accessibility that have become characteristic of Globe productions. It’s a venue where despite the faux-Elizabethan architecture, minimal scenery and historically-appropriate costumes, Shakespeare feels more contemporary than many modern day versions of the Bard’s plays and one that can take his ‘worst’ play and conjure up a gripping, funny, poignant piece of theatre.