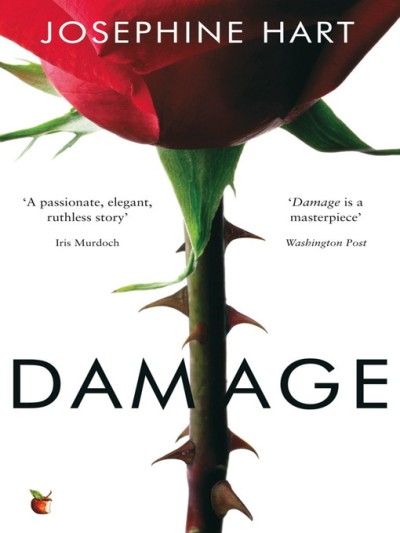 There’s a dark heart to Josephine Hart’s cult novel Damage, her captivating story of a toxic love affair, a gripping study into the underbelly of obsessive love and betrayal.

The malice at the centre of the novel is Anna, the damaged woman who destroys those around her like a bomb that explodes when she meets the unnamed narrator, her fiance’s father, their union imploding and unleashing its hell, killing, maiming and scarring everyone near the centre of the blast.

The unnamed narrator is a respectable GP-turned-MP. Until the age of 50, his life has been easy  and outwardly perfect, if passionless. Wriggling out from under the steely control of his domineering father and his formidable will, he goes onto become a doctor in a leafy part of London and marries a beautiful, serene woman called Ingrid who bears him two beautiful children, Martyn and Sally.

Ingrid is a cardboard cutout wife – elegant, beautiful, independently wealthy, she keeps a perfect house, is never not impeccably dressed in neutral natural fibres and makes few demands on her clever husband. But the cracks in this paperthin perfect life, constructed with careless ease and little thought, rip in two when the narrator meets his son Martyn’s girlfriend, Anna.

Anna is a ghost of a character, she is formed through the eyes of the narrator, people’s reactions to her (women don’t like her; she unnerves Ingrid and even her own mother eyes her with contempt and mistrust) and the details we glean from the stories she tells of her tragic past. But her charms inject our middle-aged protagonist with a crazed desire. He’s besotted with her the moment they lock eyes at a book launch, feeling for the first time that he’d ‘met my sort, another of my species’.

Their passionate, solely physical affair isn’t a conscious one, the narrator describes it as if it were a juggernaut  an unstoppable beast that he knows will lead to disaster, but is powerless against Anna. When their world does implode, it’s in a way even he can’t have foreseen.

Damage is a look at the veneer of perfection, of the danger of putting appearances and society’s perceptions over being true to yourself to the extent that when you do taste the “internal landscape”, you’ll destroy everything and anyone to feel, as the narrator puts it when he first meets Anna “at home” with yourself.

The story is a brisk, absorbing read, but its true star is Hart’s poetic writing. She’s a master of poet eloquence and is one of those writers who feels like she’s articulating my own jumbled thoughts. The novel is full of great lines that say so much with so few words. “Damaged people are dangerous, they know they can survive,” is the book’s most famous, but I liked her ponderings on the perceived idea that happy children will be happy adults.

“Might not a happy childhood be the worst possible preparation for life? Like leading a lamb to the slaughter?” This idea must have resonated great with Hart who had a tragic childhood and one that was stamped on her heart until her death, but her unhappy start in life didn’t stop her drive and enthusiasm for life, literature and people.

Damage is not a cosy read, it’s violent and brutal in an all too human way, but it rewards you with a rich, dramatic and beautifully told, tale.