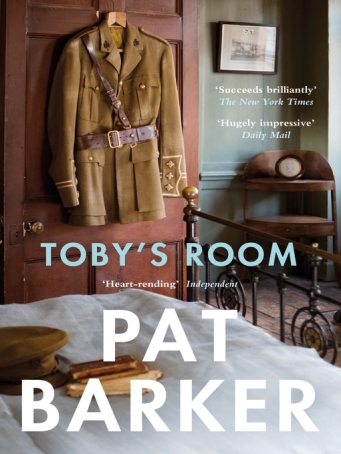 In her latest novel, Pat Barker re-visits the same time and territory that she captured so compellingly and powerfully in her Regeneration trilogy.

Regeneration, The Eye In The Door and the Booker Prize winning The Ghost Road told the story of First World War soldiers, amongst them war poets Siegfried Sassoon and Wilfred Owen, receiving treatment for shell shock at Edinburgh’s Craiglockhart hospital. Toby’s Room, a non-sequel sequel to her 2007 novel, Life Class, shifts the attention from the mental anguish of the Great War to its physical impact, and focuses too on the fallout for those left behind in Britain.

The Toby of the title is a doctor and an officer who is ‘Missing, Believed Killed’ on the battlefield. We first meet him in 1912 at the rambling family home in the bucolic English countryside where we’re also introduced to his sister Elinor. The pair have a claustrophobically close relationship that becomes inappropriately intimate one scorching hot summer’s day (English summers are always so wonderfully hot in novels, oh, if only life imitated art more often).

Skip forward five years to 1917 and Elinor and the Brooke family receive the telegram that everyone with a son or brother in France dreaded. Elinor, a starchy, tenacious and rather unsympathetic character, finds grief almost impossible to succumb to without knowing how, or if, her brother died.

She sets out to unearth the truth and in the process becomes entangled in a war she was hoping to ignore. In her search for answers, she is also forced to rekindle a dying friendship with the abrasive, and now, nose-less, Kit Neville, a contemporary of Elinor’s at the famous Slade art school where they studied under the tutelage of the formidable Henry Tonks. Elinor also enlists the help of her ex-boyfriend Paul Tarrant, now a war artist, all three lives now fated to be forever messily and painfully intertwined in Elinor’s search for answers.

While Elinor may never end up on the frontline of the Sommes, she is forced to confront the horror of the Great War when she becomes an artist for Queen’s Hospital in Sidcup, an institution that specialised in re-building the shattered faces of soldiers, including Neville’s.

As in Barker’s previous First World War novels, real life people get walk on parts. Elinor briefly spends time in the Sussex home of Vanessa Bell where she does little except insult the ‘conchies’ and annoy Virginia Woolf who looks on with her acerbic eye. There’s also a nod to the poets Siegfried Sassoon and Rupert Brooke, whose face has a particularly startling starring role at one point.

Unlike Sasson and Brooke, Barker is no poet. Sometimes her prose is plain banal and clunky. Eleanor’s diary, a rather odd occasional narrative device that serves little purpose other than to fill in some unexplained (if you haven’t read the unofficial prequel, Life Class that is) background, is a jarring change in pace and tone.

But complaining about Barker’s occasional heavy hand is like moaning at Woolf’s aversion to full stops. Barker has never been about delicate prose; her power for storytelling and unflinching truths is what draws you in and sucks you in like a quagmire on a battlefield. The pace (bar the slight derailment at each of Elinor’s diary entries) is cracking, the story fizzing along with growing expectation. In anything, rather than stripping the novel of emotion and tension, Barker’s no nonsense style heightens the drama. Importantly (and this is far rarer than it should be) Barker doesn’t disappoint as the novel reaches its climax. The characters remain solid; they may never reach Mrs Dalloway levels of realism and depth, but they are people you can believe who don’t dissolve in a weary puddle as the author panics at the looming deadline.

Toby’s Room may not hit the high notes of the Regeneration trilogy, but it’s still a wonderfully evocative, gripping novel that is taut and tight and utterly compelling.