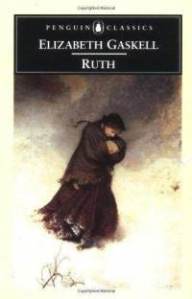 Seventeen eighties Paris dealt with, it was time to move to back to stuffy old Victorian England, a land full of moral hypocrites and ridiculous notions of ‘virtue’ and ‘proprietary’. Against this background of moral tutting and church high-handedness, ‘Ruth’ the story of an orphaned young seamstress who seeks refuge in the arms of a dastardly upper class cad only to have him – or rather his snobby mother – turn her out, unaware that she’s carrying his child, is an astonishingly brave book.You can see Mrs Gaskell tightrope-walking the moral line, pleading with the reader to love and sympathise with Ruth, a sad victim of circumstance. Even the briskest defenders of the times moral code, would surely have wilted at the sadness in Ruth’s beautiful eyes, just as the characters who condemn this ‘fallen’ woman can’t stay angry for long – although by the time they get down from their highhorse, it’s a bit late.

As ever with Mrs G, the big man in the sky plays a starring role. I always struggle with these religious passages – the character’s ardent faith that seems to defend or even encourage the worst behaviour in people is so alien and – especially in relation to the ‘Christians’ behaviour towards Ruth – barbaric. Elizabeth Gaskell’s approach to religion was far more humane, and Mr and Miss Benson, the kind brother and sister who take in a pregnant and destitute Ruth, represent a religion that puts people above scripture.

Mrs Gaskell leaves little room for the 19th century reader to disapprove – of course to the modern reader the only thing to disapprove of is the terrible behaviour of the dastardly Mr Bellingham and his mother, and the blustering moralising of Mr Bradshaw, but at the time, a woman who’d had a baby out of wedlock was the very worst kind of ‘sinner’. A few stiff upper lips would no doubt have wobbled as Ruth’s goodness and gentleness help her rise from her sinful state only for her very purity of heart to prove her downfall.

A fascinating story that brings home the harsh reatlies of life in finger-wagging Victorian England and a sharp reminder that the ‘olden days’ weren’t all bonnets, the regiment and handsome men with large fortunes.